Ricky Flamio is currently a Ph.D. student in the lab where he uses genomics to study hybridization in sturgeons. Prior to coming to Southern Illinois University Carbondale (SIUC), Ricky completed his master’s degree at Fordham University (Bronx, NY) where he used molecular and ecological techniques to 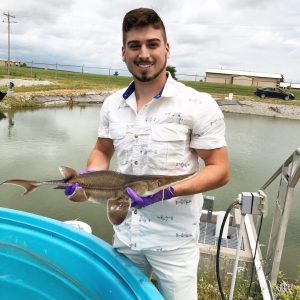 study hybridization and isolating mechanisms between two native sunfish (genus Lepomis) species. Under the guidance of Dr. Ed Heist at SIUC, Ricky is currently using next-generation sequencing techniques in order to study hybridization between the federally endangered pallid sturgeon (Scaphirhynchus albus) and the more common shovelnose sturgeon (Scaphirhynchus platorynchus) in the Missouri and Mississippi River Basins. The species are closely related and there is evidence of extensive hybridization, especially in the lower part of the species’ sympatric range. One of the conservation priorities for the pallid sturgeon is stocking of pure specimens, however, the current genetic markers used (19 microsatellites) do not provide the power needed to differentiate multigenerational backcrossed individuals and pure specimens. Ricky and Dr. Heist are working on developing hundreds to thousands of SNP markers that will be used to accomplish this goal. In his free time, Ricky likes to fly fish, scuba dive, and cook pasta.

Neotoma floridana illinoensis (Eastern Illinois Woodrat) is a state endangered species in Illinois. Previous reintroductions and genetic augmentations occurred during the first decade of this century throughout the Shawnee National Forest. Tiffanie Atherton, current PhD student, is using neutral microsatellite marker techniques to assess the past and current genetic structure of woodrats and provide vital information 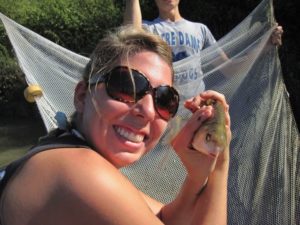 regarding the success of conservation efforts of this r-selective species. Few successful reintroductions regarding r-selective species have been documented and even fewer have assessed the genetic structure. Because woodrats are ‘mutually exclusive’, even healthy populations tend to maintain few (<20) individuals which increases the odds of inbreeding, genetic drift, and even extinction. The goal of conservation efforts was to minimize these effects by establishing a self-sustaining metapopulation throughout the Shawnee National Forest. Before attending Southern Illinois University Carbondale, Tiffanie received her bachelor’s degree in Wildlife and Conservation Biology and master’s degree in the Natural Sciences at Southeast Missouri State University (Cape Girardeau, MO) where she studied stream composition of fishes in Southcentral Missouri. She has assisted in mussel surveys, swamp rabbit surveys, animal care of Southern Flying Squirrels and Sugar Gliders, and has served as a crew leader for multiple years at Trail of Tears State Park (Missouri Department of Natural Resources). When away from her studies, Tiffanie enjoys playing in the great outdoors while teaching her children about nature and eating steak.

For his MS thesis, Nolan Smith is working to understand the characteristics of heat stress among Scaphirhynchus sturgeon, and how differences may be influenced by family and level of domestication. By using quantitative real 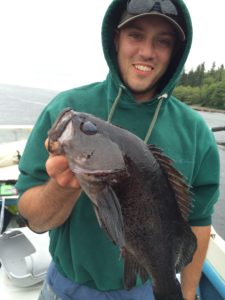 time PCR (qPCR) to continue our lab’s inquiry on this topic, we can better understand these influencing factors, and possibly recommend management actions aiding in the conservation of Scaphirhynchus sturgeon across their historic range. Nolan completed his B.S. in Biology from Washington State University in 2011, and subsequently worked for Idaho Department of Fish and Game and Washington Department of Fish and Wildlife, assisting on a number of research and monitoring projects for both agencies. He is broadly interested in the conservation of native fish. His hobbies include skiing, fishing, hunting, golf, and gardening.

although they are reproductively isolated throughout much of their historic range.  Pallid Sturgeon are less heat-tolerant than Shovelnose Sturgeon and presumably the two forms speciated when Pallid Sturgeon were isolated in a more northern refugium during the Pleistocene.  There are also significant genetic differences at neutral microsatellite markers between pallid sturgeon from the upper and lower Missouri River basins.  However, it is not known whether these differences are accompanied by physiological heat tolerance or merely indicate stock structure between ecologically interchangeable units.  Kevin is examining differences in gene expression in heat-shocked pallid and shovelnose sturgeon to characterize their physiological responses.  His work has implications for management and long term recovery of the federally endangered Pallid Sturgeon, especially in light of climate change. One of the most significant ecological change to occur in the Mississippi River Drainage in the past few decades is the explosive growth of exotic and invasive Bighead and Silver Carp, which went from non-existent in the last quarter of the 20th century to the majority of fish biomass in some rivers today.  One way that invasive species spread to new habitats faster than they can adapt through natural selection on DNA sequences is by epigenetic alteration of gene expression.  For her MS thesis, Erica Krahl is examining differences in epigenetic patterns of bighead and silver carp collected from their native range in China and from recently established invasive populations in the Illinois River, where exotic Asian carp now comprise the majority of fish biomass.

Paddlefish are perhaps the only living species of the Polyodontidae, an ancient and charismatic lineage of fishes.  Paddlefish and are endemic to slower portions of large rivers of the mid-western US.  Their native range has been fractured through the construction of dams and reservoirs, and while they are numerous in the center of their range, they are largely extirpated from the periphery.  While paddlefish can grow in reservoirs, they need running water and a hard bottom to spawn.  Past management practices have included stocking of hatchery-reared paddlefish from distant locations and likely the use of stocked paddlefish from reservoirs to restock the same reservoir.  These practices can lead to outbreeding depression as Paddlefish are stocked into maladaptive environments and to inbreeding depression as when closely-related fish are crossed in a hatchery.  Allsion Asher is studying genetic diversity of Paddlefish among populations and genetic variation within populations, including those in stocked reservoirs.  Allison earned her Ph.D. in 2019 and is currently working for Arkansas Game and Fish.